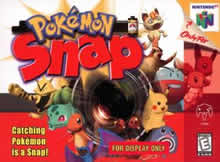 Pokemon snap is a video game related to photography and the player try to snap the very best possible pictures of various Pokemon characters.

Professor Oak calls Todd Snap( a young and inexperienced Pokemon photographer) to help him in taking the quality pictures of Pokemons as Professor knows that Todd is the best suited person to accompany him in this job from past experience. The location of the game is a Pokemon Island which has a large variety of Pokemons, undisturbed by humans. Photographs are to be taken by using a motorized, amphibious buggy named Zero-one. 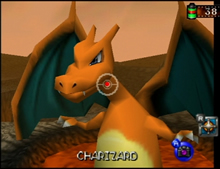 Game’s level and features can be selected by player using a menu system. Player can take maximum of 60 pictures of each Pokemon from which best rated picture would be selected by Oak and then added to the Pokemon report. Rating is based on number of factors like size of the Pokemon in the picture, whether it's facing camera, how well centered it is, whether it's performing a special move and if there are more number of the same Pokémon within the frame. All these aspects will let player to score more points in the Pokemon report and is also needed to make progress in game. This is not as easy as it sounds. Some of the Pokemon can be a little shy and won’t pose for the camera unless you lure them with special items.

Due to the limited mobility of Zero-one, Professor Oak will help in taking better pictures by providing some more items like Apples, Pester balls, Poke-Flute, Dash Engine. All of these have their own uses and could be helpful in taking much better snapshots of Pokemons.