Pokemon Ruby and Sapphire GBA roms, the latest incarnation of the Pokemon series also named as ‘advanced generation’ has come as the third installment of Pokemon series. The game play is almost the same as of its predecessors. The game is also set in a third person overhead perspective and controls are also almost the same. Like all the previous games, the main aim is to catch all the Pokemon and win over the Elite Four. It takes place in Hoenn, a fictional region consisting of nine cities and six towns connected by routes. But in addition to this, it has a lot of new features to offer. 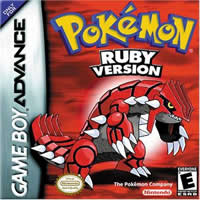 A slight change in the battle mechanics is done by the introduction of double battles in which the two opponents each can use two Pokemon at the same time. Also, there are ‘innate abilities’ which are same for a Pokemon of same specie and ‘natures’ which is different for each Pokemon. Abilities can endow the holder a certain power like immunity to certain attacks and natures influence a Poke Mon’s strength. Another new feature introduced is ‘Condition’ which is an important aspect in Pokemon Contests which happen during the game. It can be increased by the use of Pokeblocks (candies). Also, it brings up 135 brand new Pokemon making a total of 386 Pokemon. The new subplot involves two crime organizations, Team Aqua and Team Magma who want to change the climate of Hoenn with the help of Pokemon.

Ruby and Sapphire also have e-reader compatibility. Battle e-cards released by Nintendo contain trainer battles in which previously hidden Pokemon can be seen.