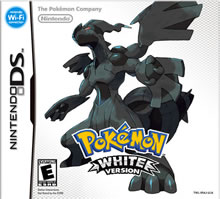 White Version - Pokemon Red and Blue was the first game in the franchise and everything has changed since then. The game has developed with GTS and other new features plus the wide array of Pokemon, which reached 649 in all when there were only 151 original Pokemon. With Pokemon Black and White, there are also new additional features which made the game livelier. For me, this is the best Pokemon game that I have ever tried. The story of this game differs in newness depending on the point of view of the player. A veteran player would likely see the plot like that of any other Pokemon games before, while a new player would see it otherwise. The game starts with a young boy traveling to the Unova region for a competition. You will need to choose a Pokemon first to be your starter then you will be ready to battle against your best friends, Bianca and Cheren. Only then will you be able to start your adventure toward being the Pokemon master. The story is spiced up by antagonists, in this case, the Team Plasma. They would do everything they can to fight for their cause, which is to free every single Pokemon whom they thought are abused by their trainers. You need to put up to the schemes of the team to win. The story is laid out good enough to still make it into a good surprise that is quiet impressive as the game continues.

The game’s sound and graphics have undergone dramatic changes, especially the graphics with their 3D capabilities now. The players are even treated to moving sprites. It may have taken more than a decade for the developers, Gamefreak, to finally come up with new moves for Pokemon. However, it all paid off with the best graphics made for any Pokemon game with this one. They are good moves that are well executed though some may come off as boring or rushed. Do not be surprised if you see some of the Pokemon looking quiet weird, such as Sigilyph. However, you should be quite happy with outcomes like Chandelure. The sounds of the game are also catchy and one of the memorable types of music used in the franchise. There is that appropriate upbeat sound used during pumped up gym battles. This certainly is a dramatic exit from the dull sounds used in Pokemon Pearl and Diamond. While some Pokemon may be perfect, you just need to accept the fact that others are still weird.

The gameplay is always an important aspect of a game. Every player can hold six Pokemon plus the one that you really own. Every time you manage to win a battle, this is worth an additional experience for you. The more experience you earn, the higher your level will become. The higher you go up, the stronger you will be as a player and the more moves you will be trained to do. All these things can help develop the speed of your Pokemon too. You need to prepare for the C-Gear, which gives you access to various features such as Infrared Trading (IR) and the Entralink. Among all the features of this game, IR Trading is the most useful. You can play the game or trade Pokemon with anyone given that your DS is close by. You can gain experience in a different way in this game because it depends on the level of the other Pokemon that you are battling against. If you win over a Pokemon with a higher level, you will gain more experience. There is also a unique Pokemon during the trip to Unova. You will no longer see Zubat and Geodudes but only a new Pokemon. This only increase the feeling of excitement and anticipation of what is about to happen, just like what Pokemon Red and Blue has brought to the players from the start. This also makes the game more difficult or challenging, however you want to put it. I even lost to some Pokemon in a few battles just because I did not know what to expect it would do. One of the game’s goals is for you to collect all 649 Pokemon, which is quite possible unless you have many friends who are cool with trading Pokemon over Wi-Fi. However, you might not be able to do the trade if you haven’t done any of the earlier games just so you can complete the Pokedex. Moreover, some Pokemon are just impossible to collect, just like Darkrai and Shaymin.
The journey towards becoming the Pokemon master or just finishing the game would take more than 20 hours or even longer for new players. However, you may really need more than 100 hours to accomplish the Pokedex. The game also boasts of massive features, with some only accessible to a Pokemon Champion, which is also expected to extend the playtime even more.

The bottom line is that Pokemon White is a good game for both veterans and new players. It is a good investment for your DS entertainment. I can say that Pokemon has already recovered fully from the less than sterling response to Generation IV, which had initially discouraged me from buying Pokemon White. After playing the game, it is obvious that Gamefreak has certainly done their best to improve this game. I had the most fun with a Pokemon game ever since Pokemon Blue.