Pokemon Emerald, an enhanced remake of its predecessors Pokemon Ruby and Sapphire is said to be one of the best Pokemon games around.
Emerald is set in the world of Hoenn (of Ruby and Sapphire) and involves the top legends - Kyogre, Groudon and Rayquaza which were introduced in Ruby and Sapphire. As told by its box art, Rayquaza plays a vital role in this story of a Pokemon trainer and the evil organizations Team Aqua and Magma, who wants to destroy Hoenn. It has almost same gameplay but includes many new features which make it different.

The plot is slightly modified. Groudon and Kyogre are awakened by Team Aqua and Team Magma and they start to battle each other. 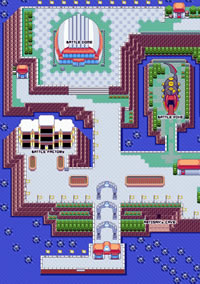 Now the player has to use Rayquaza to stop them. Many new areas have also been added including Mirage Tower, Magma Hideout, Desert Underpass, Marin Cave, Terra Cave and many more.

There is a change in the game mechanics and more focus has been given on the competitive battling aspect. In addition to the double battles inherited from Ruby and Sapphire, two different trainers can be united to battle together as a pair. The battles are fought in Battle frontier, an expansion of Battle Tower in Ruby and Sapphire which contains 7 buildings. A trainer can be challenged by many battle styles which include Random Rooms, Rental Pokemon, Tournaments and many more. The player can also re-battle the Gym leaders through a ‘Match call’ feature. Like the Pokemon Crystal, Pokemon sprites are animated in a battle.

The game is also appreciated for having sharper and much more detailed graphics than Ruby and Sapphire.