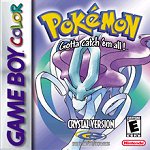 Pokemon Crystal is an enhanced remake of the previous two games, Pokemon Gold and Silver with slight updates in design and graphics
It utilizes the same general blueprint design supplied in Red/Blue/Yellow. The main character is a boy who walks through the land to become the world’s greatest Pokemon trainer. Like the Gold and Silver, it also has 251 different species hiding, waiting to be trained.

In addition to the basic features, it also has a lot of new additional features which make it different and better. First time, players can choose the sex of their character as it provides a new female character to be chosen. Also, all the Pokemon have animated sprites. For example, the flames on the back of Cyndaquil will flicker when he enters for a battle. Few new subplots have been added like Pokemon Suicine which is also shown on the game’s front cover.

And, the biggest new addition is the Battle Tower which is a building in which the players can enjoy Pokemon Stadium type of fights.

The overall game is divided into ‘chapters’ in the form of Gym battles through which you can reach the next town and sequence of puzzles and tasks by which you can win over the Gym leader who will give you access to the next part once defeated. Many new items including the PokeGear are also included. A PokeGear can act as a watch, radio, map and phone and allows a player to call other players who offer their phone number.

Over all, Pokemon Crystal is not very different from the Gold and Silver, but provides a great gaming experience!