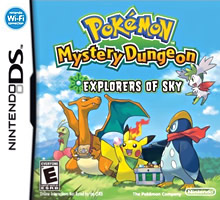 The moment that you start playing Pokemon Mystery Dungeon: Explorers of Sky, without a doubt, you would experience double the fun from that of playing other series such as Explorers of Darkness as well as from the Explorers of Time. In this Pokemon game, you would have a chance to be transformed to an actual Pokemon and after that, you would have to get a partner, who should of course, be a Pokemon as well. Once done, both you and your partner would go for an adventure and see what is in store for you and save the world where you are in.

Players will certainly be moved by the story of this Pokemon game as well as with its finale simply because of the better and well-developed features that it has been updated with, and new and special kinds of episodes that was added to it. Even if you are just going to begin playing Pokemon Mystery Dungeon, this will be a good opportunity for you to start through this game and of course for those who have always been playing Pokemon Mystery Dungeon, a lot of secrets await them. 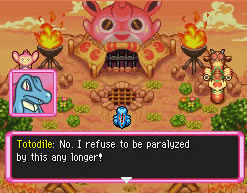 The Features of the Game:
* By becoming a Pokemon yourself, you would be able to become part of a world that is totally different and you would become part of a kind world that is truly wonderful, full of adventure, and even get a chance to save this world. * When you start to play those new and special episodes that would the time when you would be able to unravel even more chapters in the storyline of the Pokemon Mystery Dungeon.

* You would be able to choose from the 19 kinds of Pokemon which could possibly be the character that you are going to use and this includes 5 other kinds of Pokemon that could be considered by those who are just beginners. * By means of an internet connection, you would now have the opportunity to trade different kinds of items. Apart from this you may also try and trade with the use of the Explorers of Darkness together with Explorers of Time DS Rom.

* With the use of a wireless connection, locally, you may now send to your friends a dungeon in demo version if for instance they have a Nintendo DSi or even a Nintendo DS.

* If you have access to an internet connection that is a wireless broadband, then you may also explore and play missions that are not usually found on the game as well as get to rescue friends and you would be able to do so through the Wi-Fi Connection for Nintendo.

Version Exclusives
Most of the games of Pokémon usually have kinds of Pokémon that may not be found on other versions, which means that some are unique to only one particular version. However, it is also possible that it may still be unlocked by making use of codes for Wonder Mail. Combee, Lucario, Celebi, and Pachirisu are just some of the Pokémon that are unique only to the game Explorers of Time. With regard to the game Explorers of Darkness, Pokémon that are exclusive to it includes Mewtwo, Lopunny, Rotom, Burmy and Buneary.